Stay up to date

Table 13 is raving about it’s latest appearance in Exploding Potatoes review blog. Here’s a taste of what was written…

“I kept looking for Count Basie to show up with his band. Alas, it was not to be, however the ambiance at Table 13 in Addison, Texas would have made the legendary piano player feel right at home. This fine dining restaurant, located in a northern suburb of Dallas, did a fine job of keeping the bland, chain restaurant-filled strip mall atmosphere outside its doors. When we walked through the front portal, we were transported back a few decades to a time when service was great and the food even better.

Courtesy of a friend’s Facebook post, I had seen Executive Chef T. William Reemtsma, CEC, CCE on a YouTube video. A few weeks later I found myself in Dallas so it was only natural to try dinner on the chef’s home turf, Table 13. This decision did not disappoint. Chef Ted, as he is locally known, produced a fine meal; and his staff served with subtle panache. Let me show you: 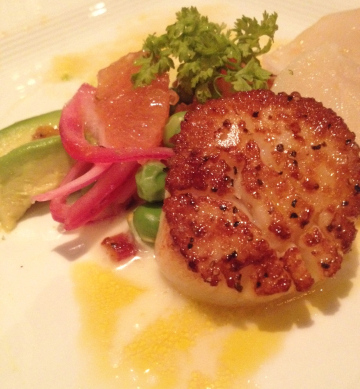 The appetizer tells all. A good one creates anticipation of excellent cuisine to come; a bad one portends a trip to the pharmacy for something to smooth the stomach. Table 13’s seared scallops were perfectly cooked. Light in texture and delicate in flavor, I could have eaten four servings and called it a day. The garnish was a treat as well, with Texas red grapefruit slices adding a little sweet acidity and bits of red onion giving some bite. A few avocado slices cooled things off, presenting a nice creamy texture. The first course was delicious on all counts…”